MKULTRA
REWRITE THE PAST
Out Now!

MKULTRA
A Novel
​
​T.S.Smith
​
From the author of the novella HORIZON 616, T.S. Smith brings you his exciting new novel, MKULTRA.

Set against the backdrop of the Cold War during its height, MKULTRA is a story that follows the son of a veteran infiltrator and saboteur as he struggles to find himself amidst the 1970’s world of drugs, sex, and rock music.

He is then thrust into a dangerous game of psychological warfare that challenges the very meaning of his existence. Project MKULTRA.

REWRITE YOUR WRONGS, REWRITE YOUR PAST.
FREE! YOUR TRIP’S ON US.
Want to take a ride to the Saddle Mender's Ranch? Purchasing details below:
AMAZON:
Buy the paperback from Amazon now at the following  link: PAPERBACK
Only $0.99 for the Kindle Edition! Amazon Kindle: KINDLE 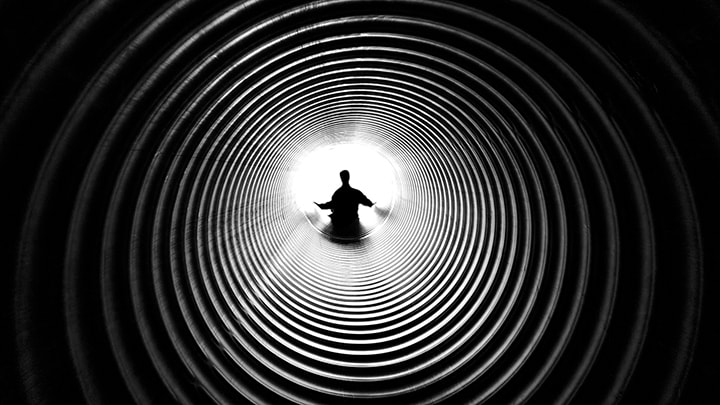 PREVIEW THE FIRST PROLOGUE SECTION OF MKULTRA!
TO RECEIVE THE COMPLETE PROLOGUE, FIRST CHAPTER OF THE BOOK, AND OTHER EXCLUSIVE CONTENT, JOIN THE MAILING LIST TODAY!
MKULTRA
PROLOGUE: YELLOW SUN
APRIL 24, 1950
One
RICHARD Stephen Havens plummeted through the sky at such a rapid pace that his oxygen mask bit hard into his leathered skin. The rubber that was meant to protect him had peeled away and the device’s metal frame pressed into the bones of his cheeks where it left indentations of its outline. He was falling at a rate of fifty-four meters a second, terminal velocity for a soldier of his mass. This was something that he had done hundreds of times during his years of service although each attempt was no less dangerous, the drops always needed to be performed with the greatest care and only after meticulous preparation. On the shoulder sleeve of his jacket was the AA logo with the small number of 83 embroidered in subscript, the logo of the special unit 83rd Airborne Division, a group of highly-specialized infiltration operatives known only to a select few top government officials in the West. His sleeves flapped as his body approached the northeastern cultivated lowlands of Semipalatinsk, Kazakh, SSR, south of the the valley of the Irtysh River. Their target was the facility known as the Polygon, the East’s first nuclear test site. It was still expectedly out of sight to him as he descended to the forested farmlands 200 miles to its east.

As he fell, the soldier imagined the location of the test site in the distance. He visualized the compound set in a vast expanse of desert and wondered what the structure would look like when they finally made their approach, would it appear similar to what was shown on the provided reconnaissance images? Most likely. The Polygon was ground zero in the USSR, the site used for the detonation of First Lightning in August of 1949, the Soviet’s first display of nuclear power to match that of the United States’ arsenal. But this time it would be different if Havens’ unit was successful. Gathered intelligence had shown that Soviet weapons development had advanced swiftly and at a much quicker pace than the Americans previously thought possible. It was believed that the East had already miniaturized their first nuclear weapon systems to use on the battlefield against the West in localized deployment, something that would be absolutely catastrophic for the Americans and their future. If the East went to battle against the Western allies with such a capability, the tides of war would quickly turn in the Soviet’s favor. Defeat would soon follow.

Richard Havens and the four others of the 83rd Airborne Division were to infiltrate the Polygon undetected by the enemy, gather any and all intelligence available within the facility, record all data available using microfilm cameras, sabotage and destroy the test of the miniaturized nuclear weapon, and return the information to the evacuation zone where a FULTON recovery system would be deployed. After this first series of objectives was complete, only then would their secondary mission of survival be prioritized when they would rendezvous in the mountains for extraction. With the stolen prize of the miniaturized weapon and the wealth of information in American hands, the CIA assessed they would neutralize Eastern weapons development and keep the Cold War still and without bloodshed for a time, at the minimum long enough for the U.S. to maintain the upper hand in the constantly evolving landscape of war battlefields. The group’s mission was known in the West as Operation Yellow Sun and the Soviet test weapon, Yellow Boy.

Ice hung in the air as Havens ripped at the clutch cord that held tight to his breast, the huge nylon parachute deployed and he felt the immediate pull of the chute and then an unexpected tangle of the cords that came with it. His body spun round with violent force as he was whipped to one side and then the other. His shoulders screamed out in pain as the man plummeted towards the bare earth with no break in his fall. Hell, the ground was close now, it was much too close, and the tearing that ripped at Havens’ arm was sharp and acute. His body shifted out of control while he frantically attempted to grasp the knife that was sheathed in his belt to free himself but it was just out of his reach. The jumper’s body tumbled over and over as he fell through the air and the horizon turned like the the hands of a clock that never stopped. Havens watched as the details of the ground bloomed while his descent quickened. Dirt. Richard could see the dirt. He tried again for the knife and made a desperate attempt to push his arm through the twisted cables where his fingers touched the hilt once more but then lost their hold. His mind raced. Ground. Death. He made a third attempt, this time bending his body around his waste and avoiding the cords, his fingers slid around the knife’s hilt. He ripped the thing from its sheath and held the blade high above his head where he searched for the knot that had formed between the twelve cords two feet above his shoulders. If he guessed wrong and cut the wrong line that held the parachute, he would plummet to his death. And to make matters worse, his body was rotating while in complete free-fall. He slid the blade against the fifth rope, thinking and praying that he had the right one, and cut it.

The knot untangled while the parachute freed itself loose and ripped hard at the soldier’s body to slow his descent, he was still falling but his world stabilized. The sheer force of the pull made his shoulders feel as if they had been ripped from their sockets.  He took in a large deep breath of air through the vacuum tube attached to his breathing apparatus and closed his eyes as he approached the ground. He hadn’t opened the parachute soon enough. This was it. Ground. Death. Richard Havens slammed hard into the cold earth below with unbridled force and his thoughts shattered. The soldier’s world went dark